31 March 2022
Dr Xueli Tan joined the Singapore Youth Orchestra (SYO, now known as SNYO) back in 1989 where she did her first orchestral work as the associate principal French horn for Tchaikovsky Symphony #5. “I had cold hands and feet at every rehearsal,” she shared, “… but it was one of the most memorable experiences with SYO.”
As a board-certified (USA) music therapist, Xueli has been a music therapy clinician, researcher, and author/editor for the past 27 years. After receiving her Ph.D. as a Presidential Research Fellow at the University of Iowa (USA) in 2015, Xueli took on faculty positions in universities in USA and Norway. She has also served on research committees for the American Music Therapy Association and Society for the Arts in Healthcare (now known as National Organization for Arts in Health), and was on the editorial board for four international music therapy scientific journals.
Xueli auditioned for SYO in 1989 when her good friend, Connie Lau, alerted her about the call for horn players, “Connie, who was in the training orchestra SYTO at that time alerted me about an upcoming audition at SYO, and that they were looking for French horn players. I am eternally grateful to Connie for telling me about this opportunity to audition back then; we have remained good friends for more than 30 years, even with our collective intercontinental moves between Singapore, Australia, USA, Norway, and Hong Kong.” 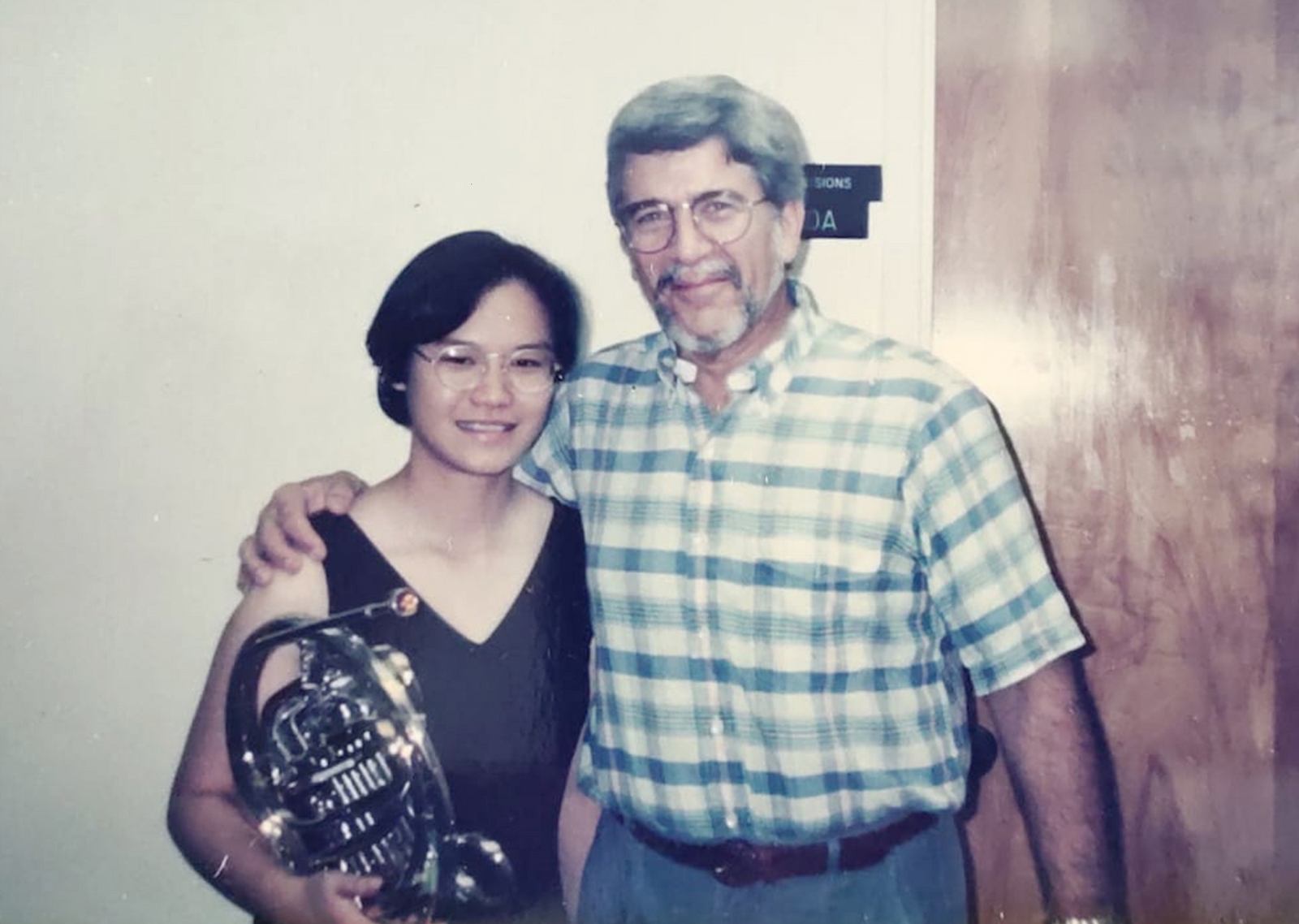 Picture above: 22 year old Xueli with her first horn teacher, the late Mr Glenn Jansen from the Philadelphia Orchestra.
Xueli shared, “There’s something about Victoria Concert Hall that housed me in a very homely way on Thursday evenings and Saturday afternoons. I had practiced in every nook and corner possible in that building; whether I am sitting on the huge stairs leading up to the circle seats practicing the Strauss Horn Concerto #1 while looking out at the bay, or running through endless scales and technical studies holed up in a tiny practice room backstage, or the rare opportunity to have the whole stage to myself trying to project Mozart Horn Concerto #3 to the last row of the audience seats.”
One of the most pivotal experience Xueli had with SYO was the performance tour to Kumamota, Japan in July/August 1993. “The years when I was in SYO was a transitory period where Ms Vivien Goh was stepping off the podium and Mr Lim Yau was coming in as the new Music Director. Thus, there was only one performance tour scheduled during those years when I was in SYO. We had a strong horn section for the tour, who got to ‘proclaim’ very loudly (in octaves!) the opening of Tchaikovsky Symphony #4 in every town and city that we performed in. Those 10 days of music-making were precious time spent with my music friends. Four days after returning to Singapore from Japan, I flew to the United States for my music therapy studies. I then spent the majority of the next 27 years abroad in USA and Norway.” 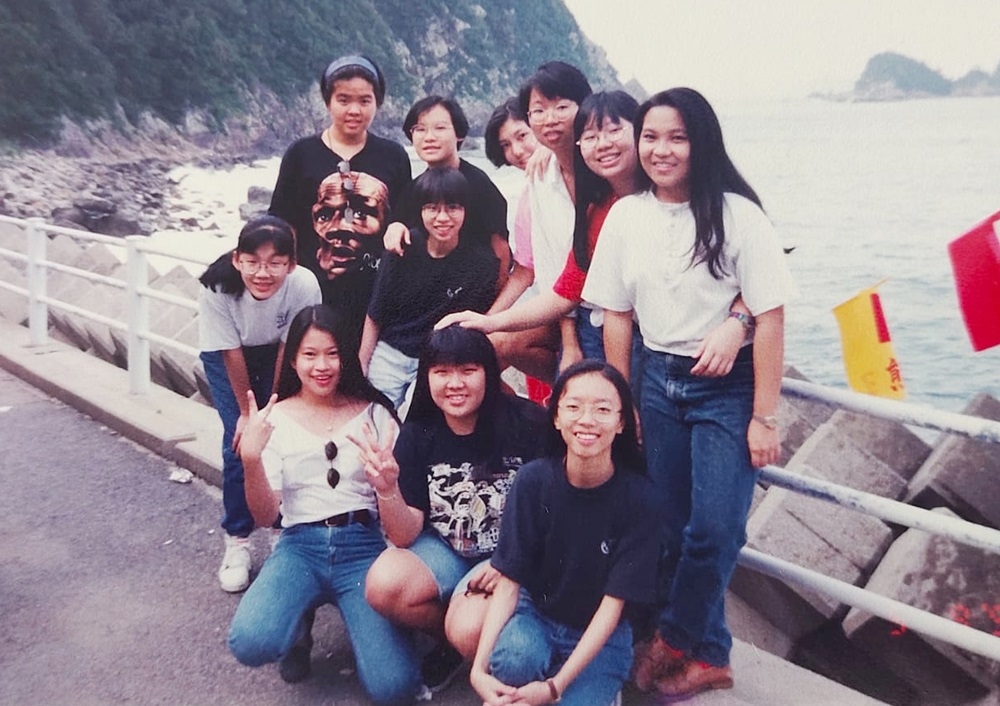 Having fun staying together by a fishing village during the tour 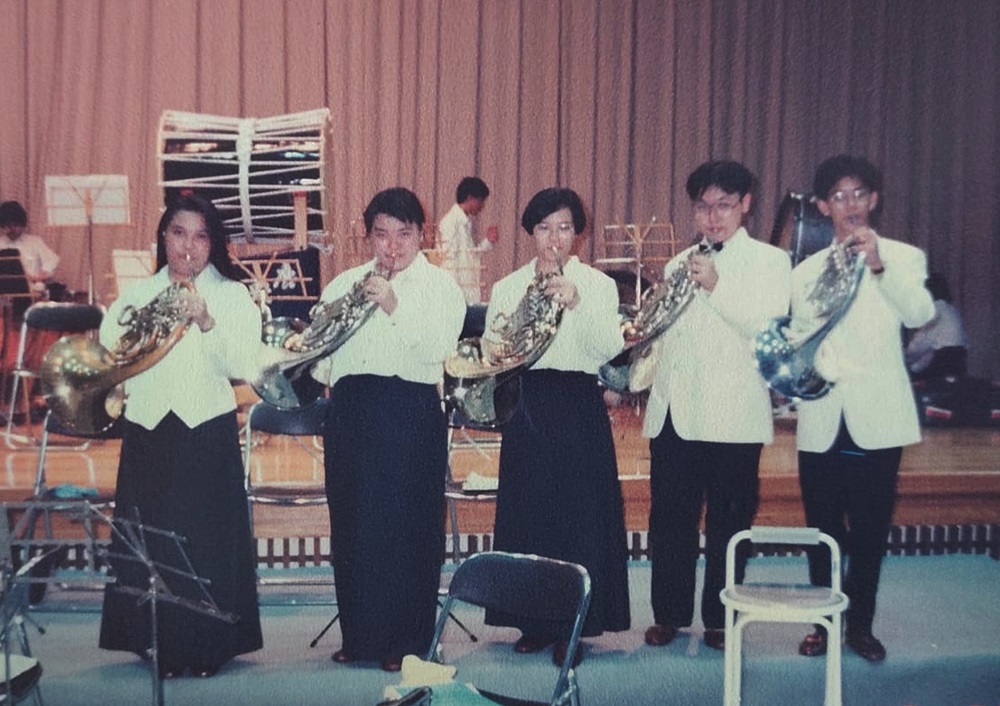 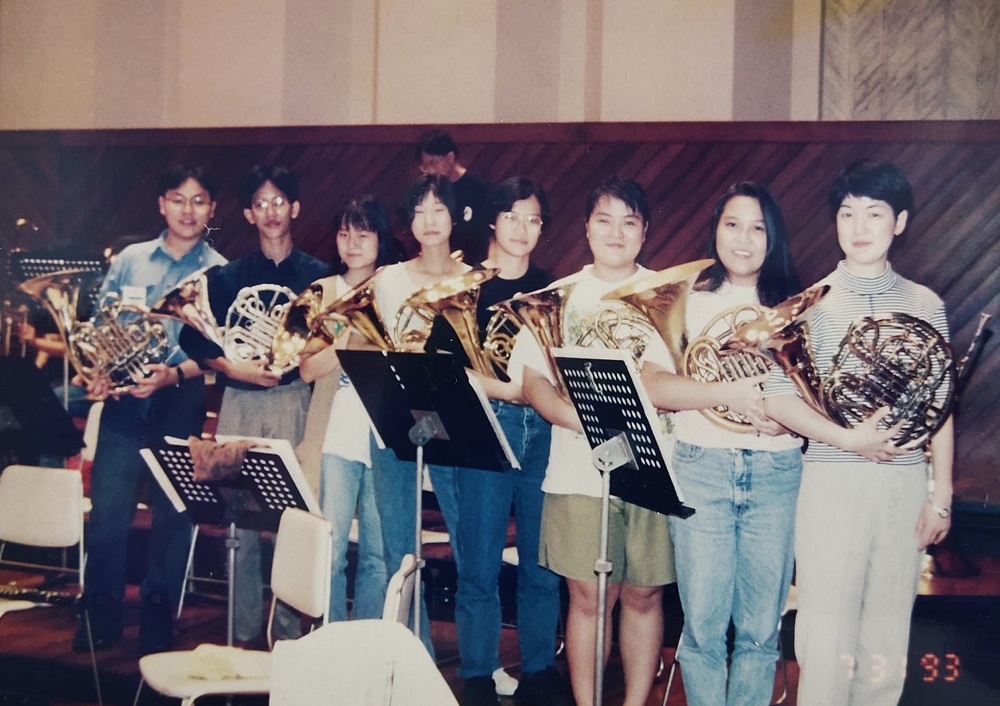 SYO horn section with Kumamoto Youth Orchestra horn section
Xueli remembered the times when she first found her interest and passion for music and how this integrates with her current profession. “I didn’t come from a musical family, so the closest experience I had with music back then was listening to vinyl records and cassette tapes at my grandparents’ house. I think I was about 8 or 9 years old when I saw a music variety show on TV with shiny things producing music that piqued my curiosity. Not having the vocabulary to name what they were then, I simply called them ‘giant metal spoons’! I was really curious to know how these giant spoons can make such beautiful music, so I joined the school band and was assigned to play the horn. I started piano lessons right about the same time too. But my piano days were short-lived as I felt I couldn’t quite literally ‘breathe life’ into the piano as I could with the horn. This connection between the human breath and a piece of inanimate shiny metal continues to fascinate me even until now. Fast forwarding to more than 20 years later, as a music therapist, I am required to have skills in guitar, piano/keyboard, percussion instruments and other functional music instruments that we utilise in therapy. We are well-versed in many different genres of music to align ourselves with the music preferences and tastes of the people we work with.”
Besides music, Xueli enjoys building things, “The most laborious thing I had built was a kitchen countertop with an inset sink, tiles, everything from sand and cement! I think playing the French horn in SYO had trained me to achieve a state of undisturbed, unflappable one-pointedness of mind.” 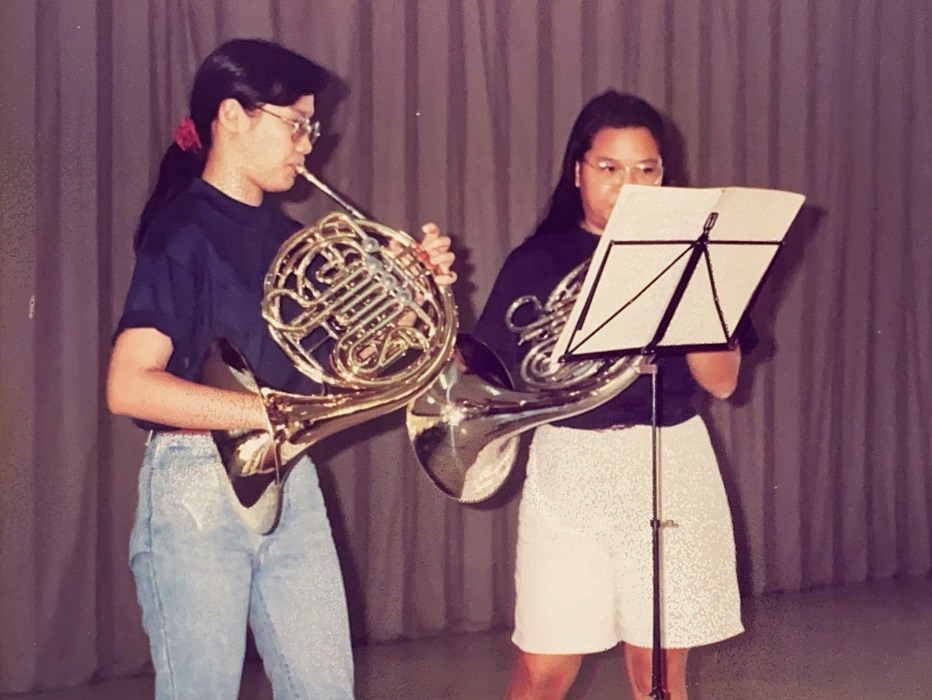 Horn duet performance at an SYO Camp
Xueli had recently moved back to Singapore at the end of 2020 due to the pandemic and is now consulting in and developing research for the rehabilitation department at St. Luke’s Hospital specialising in physio, occupational, speech, art and music therapies. “When the world literally ‘shuts down’ and everyone went into isolation, choosing where I want to be situated became quite an immediate existential question for me when the pandemic started. It became the huge driving force to make my transcontinental move from Europe back to Southeast Asia.”