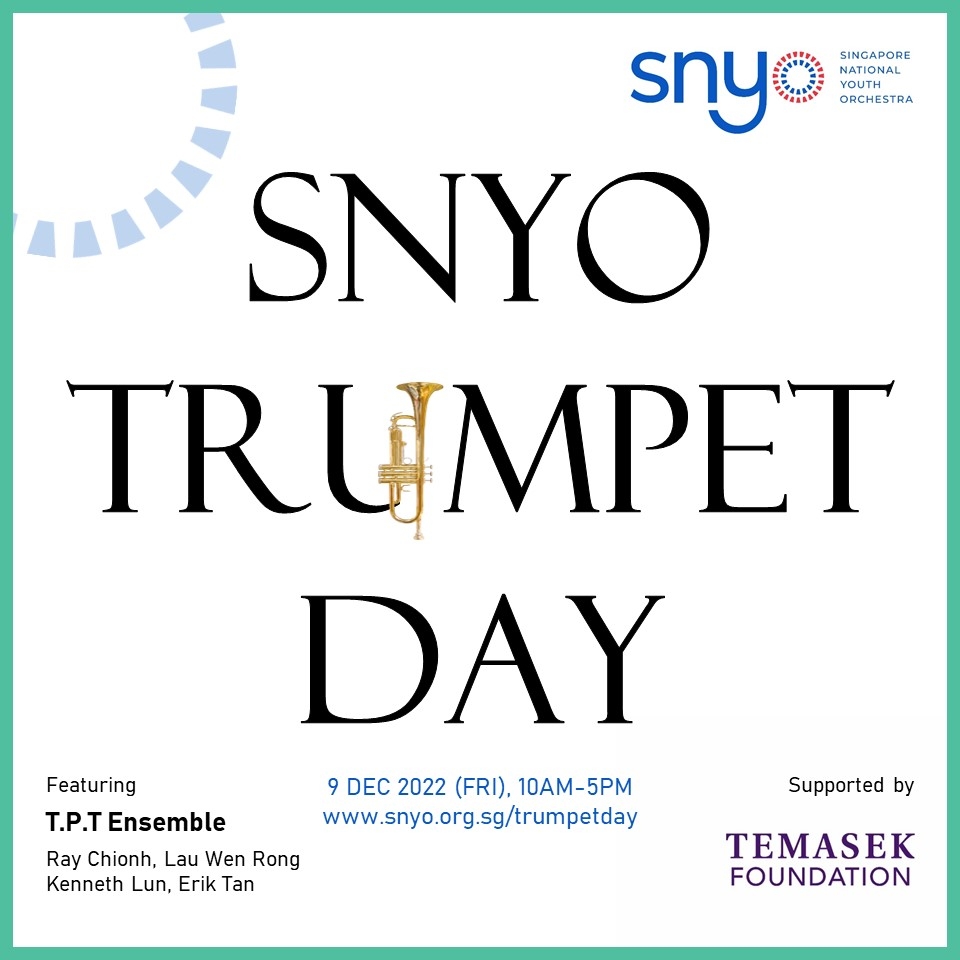 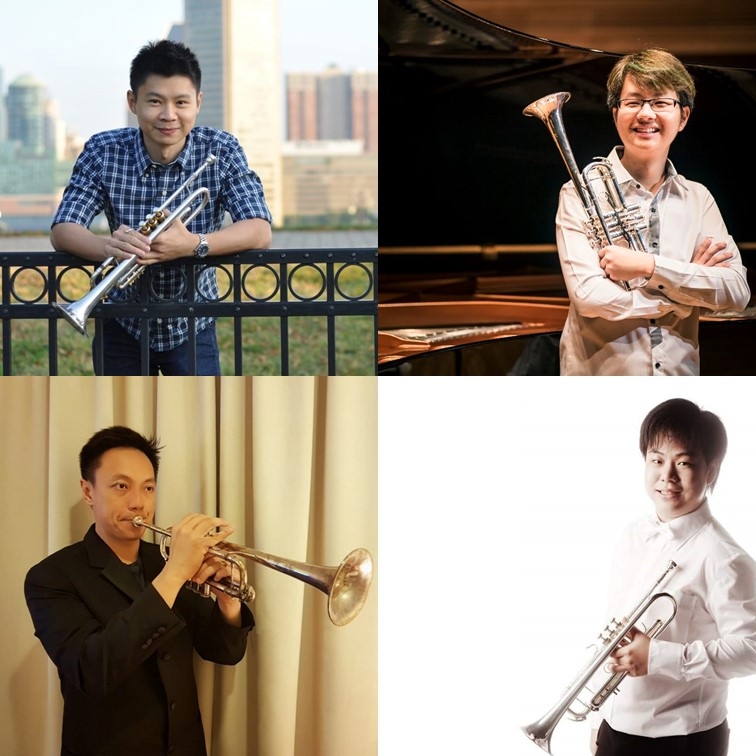 We wish to thank Temasek Foundation for this event’s grant support.

FAQ: Do I have to prepare any pieces for the SNYO Trumpet Day? 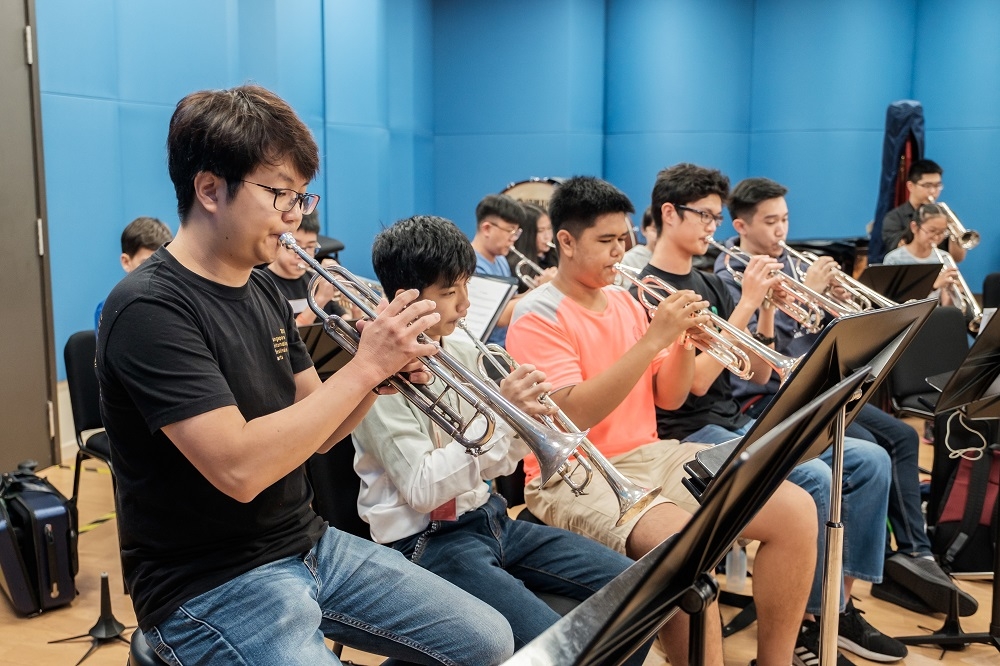 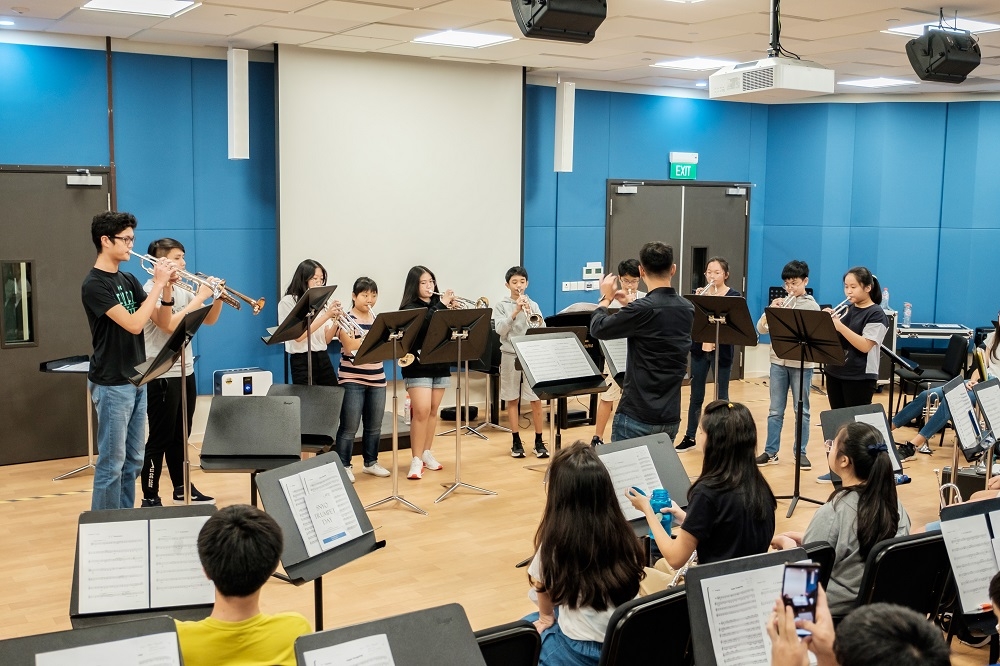 (Photos above: SNYO Trumpet Day at the SNYO Studios, October 2019)
*
ABOUT THE T.P.T ENSEMBLE:
RAY CHIONH
Ray completed his Bmus (Hons) at the Hochschule für Musik Detmold in Germany, where he studied with Prof. Klaus Bräker and baroque trumpet with Hannes Rux. Before his studies in Germany, he was under the tutelage of David Smith at the Nanyang Academy of Fine Arts.
Prior to returning to Singapore, Ray has performed and toured with various orchestras in Europe such as the Landestheater Detmold, Animato Philharmonic Orchestra, Neue Philharmonie München and the Moritzburg Festival Orchestra. He has attended Masterclasses by renowned trumpet artist such as Reinhold Friedrich, Luis Gonzalez, Kristian Steenstrup, Willem van der Vliet, Christopher Dicken and Andre Schoch.
Since returning from Germany, Ray coaches the local school band’s trumpet sections, as well as, working as a freelance musician with the local orchestras such as the Metropolitan Festival Orchestra, Singapore Lyric Opera, New Opera Orchestra, The Philharmonic Orchestra, and the Orchestra of the Music Makers.
LAU WEN RONG
Section trumpet of the Singapore Symphony Orchestra and prizewinner of the International Trumpet Guild (ITG) Solo Competition in 2013, Lau Wen Rong completed his Master’s Degree with Raymond Mase at The Juilliard School under the Frieda and Harry Aronson Scholarship.
Wen Rong received his Bachelor of Music Degree from the Yong Siew Toh Conservatory of Music of the National University of Singapore, where he was awarded a full merit scholarship.
Wen Rong has studied with Jon Dante, Mark Gould, Joe Burgstaller, William Theis and Tay Jiun Ngiap. Wen Rong is currently on the faculty at the Yong Siew Toh Conservatory of Music and he is a Yamaha Artist.
KENNETH LUN
Kenneth Lun graduated from the prestigious Peabody Institute of the John Hopkins University, Baltimore MD, USA with a Bachelor of Music (Major in Trumpet Performance and Minor in Jazz Trumpet).
Since coming back from the USA, Kenneth has had a distinguished career in the music scene. He currently serves as principal trumpet of the Singapore Lyric Opera Orchestra, and also plays lead trumpet with the Summertimes Jazz Band.
Apart from the concert stage, Kenneth is also an experienced and one of the most sought after trumpeters in musicals. His list of performances include Cabaret, West Side Story, The King and I, Chitty Chitty Bang Bang, Beauty World (solo trumpet), The Magic Box, Sing Dollar!, Victor/Victoria, Fried Rice Paradise, Wicked, A Chorus Line, My Fair Lady, The Sound of Music, Singapura and The LKY Musical.
ERIK TAN
Award-winning Singaporean trumpeter Erik Tan has performed a wide range of orchestral and chamber repertoire. He graduated at the Yong Siew Toh Conservatory of Music and is a recipient of a full merit scholarship. In 2015, he received a scholarship grant from the Trailblazer Foundation and graduated with a Master of Music from the Yong Siew Toh Conservatory of Music.
He has also excelled/won awards in competitions chamber and wind band categories. He was 2nd prizewinner for the Norman Cooper Chamber held in Aberdeen (Brass Polish), Gold award winner at the World Music Contest held in Netherlands (Mus’Art Wind Orchestra), and 1st prizewinner at the Singapore International Band Festival (Orchestra Collective).
Professional groups that he has performed with include the Singapore Symphony, Macao Orchestra, Malaysia Philharmonic, Singapore National Youth Orchestra, Peabody Symphony, Yong Siew Toh Conservatory Orchestra, The Philharmonic Orchestra, Orchestra of the Music Makers, Penang Philharmonic, Mus’Art Wind Orchestra and the Singapore Armed Forces Central Band. He has participated in festivals such as the Young Euro Classic (Berlin, Germany), Aberdeen International Youth Festival (Scotland, U.K) and the International Tattoo of Military Band (Quebec, Canada), and is also one of the five trumpet players in Asia to win an audition for the 2014 Asian Youth Orchestra Asia Tour to China, Taiwan, Japan, and Hong Kong.
He was under the tutelage of William Theis, co-principal trumpet of the Malaysian Philharmonic Orchestra, and has also studied with Laurence Gargan, who was the principal trumpet of the Singapore Symphony. During his senior year at the conservatory, he was selected for an exchange program at the Peabody Institute of The Johns Hopkins University, having the privilege to study with former-Canadian Brass member Joe Burgstaller as well as former-Baltimore Symphony member Mr. Edward Hoffman.